Earlier this week I drove west from Phoenix on Interstate 10 and spent a few days visiting the Venice Beach area of Los Angeles. Each of the two mornings I was there I ran on the beach, barefoot on the firm and smooth sand by the waterline. Between the mindful feeling underfoot, the seagulls gliding overhead, the sound of the ocean waves, and the perfectly comfortable temperature, these runs were my most enjoyable barefoot running experiences to date. 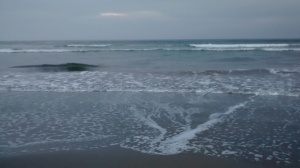 The last time I ran barefoot on a beach was in 2006 during a vacation in Costa Rica. I was a heel-striker back then, addicted to motion-control shoes and orthotics, though I remember employing a more flat-footed landing since that just felt easier and more natural running barefoot on the firm sand. Of course at the time I was not accustomed to running that way and I was most certainly not doing it correctly; likely reaching out with my lead foot and not landing quickly under my hips. That afternoon and for the next couple of days my calves were more sore than they’d ever been before or since. This week, in contrast, there was no post-run soreness, just the familiar feeling I experience following barefoot running that mimics the soothing effects of a foot massage.

During my second morning at the beach I did a 9.3 km run. The first half was on the sand near the waterline heading north from the pier at the foot of Washington Blvd. to the Santa Monica Pier. I ran back on the boardwalk, which interestingly, unlike the boardwalks I was familiar with from my years living on Long Island, was made of concrete, not boards. This is what one of my feet looked like back at the parking lot.

I was disappointed to see that most of the other people walking or running on the beach were wearing shoes. At least some of them had minimalist shoes like FiveFingers, but I didn’t even see a need for them. There were occasional areas sprinkled with small seashells and polished rocks, but the way they were partially embedded in the fine sand made them harmless. Not once did I experience a twinge of pain from stepping on something. While shoes are often an appropriate choice when faced with rough terrain or cold temperatures, from my experience they seriously interfere with the ease and enjoyment of running on a clean ocean beach. Barefoot runners need to do a better job of getting the word out.

Humans aren’t the only animals who like to run around barefoot on the beach.

1 thought on “Barefoot on Venice Beach”