I’ve run the Jerome Hill Climb race many times, beginning in 1988, about one year after moving to Arizona. It’s a point-to-point uphill race on Labor Day weekend that starts in the small town of Jerome at an elevation of just under 5,000 feet (1,500 meters), then climbs approximately 1,100 feet (335 meters) along 4.5 miles (7.2 kilometers) of mostly little-used unpaved roads to the finish. It’s a very scenic course with splendid views of valleys and mountain peaks, and Jerome—originally founded to support copper mining operations and now mostly populated with artists and entrepreneurs and their employees who cater to tourists—has lots of old and weathered buildings with interesting histories lining narrow, twisting, and hilly streets.

This past weekend, I ran the Jerome Hill Climb again for the first time in 11 years. My friend Sandra was also entered in the race. We talked briefly minutes before the start when she asked me why after all those years I decided to run it again. I didn’t have a good answer at the time, but I thought about her question later that day and came up with two explanations.

As I’ve gotten older I’ve come to appreciate the value of experiences over material things. Jerome is quite an experience with its challenging hills and altitude, and unique scenery, making it a refreshing change from my usual running locations in the Phoenix area.

And after 11 years things have changed quite a bit with my running. When I signed up for the 2015 race I was curious how it would feel running a very hilly, unpaved course in my unsupportive minimalist sandals using a different running form. But I was also a little wary of the event, not sure how sore I might be the day after, or of my memory of how rough the terrain was. And I hadn’t been doing any hill training to speak of.

Happily, my concerns proved to be unfounded. While as expected I walked two sections of the steepest grades, just as I had every other time I’ve run the race, I felt good. My minimalist sandals and improved running form worked great, and I managed to finish first in my age group out of 13 people! 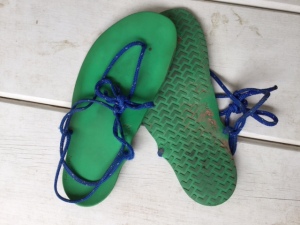 These are the Xero Shoes 6 mm minimalist sandals I ran the race in.

Grinding up the steep grades with a pronounced forward lean at the ankles resulting in a smaller than usual angle between my feet and my tibias, plus the effects of running back down the hill to my car after the race, I thought surely I would be sore the following day. But I have excellent mobility and strength in my ankles and feet—much more so than 11 years ago when I ran with orthotics and motion control shoes. Honestly, except for the first minute walking around the house after getting out of bed, I wasn’t sore the next day.

It wasn’t the first time I was certain I’d be sore the next day from doing something out of the ordinary with my body, but was not. I’ve learned from experience that I’m not that prone to soreness. I suspect being a vegan plays a role, as plant-based diets are known to reduce the inflammatory response.

The two things about the run I found most significant though was the presence of a barefoot runner, and a question from another runner regarding my sandals.

Among the approximately 255 entrants was a guy in bare feet. I was impressed because the running surfaces were way too rough for me to consider running barefoot. He had a pair of Vibram FiveFingers tucked into the waistband of his shorts, but he was still barefoot when I ran past him just before the first mile marker. Seeing that made me even more confident about my plan to run barefoot in the upcoming Phoenix 10K which traverses city streets with relatively smooth pavement.

When standing around awaiting the start of the race, I noticed that a group of girls were looking curiously at my minimalist sandals. Each of them wore conventional running shoes in a variety of bright colors. They had the typical cushioned soles with exaggerated thicknesses at the heel.

“How do you run in those?” one of them asked me.

I explained how I landed on my forefoot, under my hips, lowered the back of my foot until the heel gently touched, and then quickly lifted the foot behind me. I also added that the sandals, because they provided no significant support, allowed my feet and ankles to strengthen.

The irony of her question quickly occurred to me. So indoctrinated are most of us in the idea that conventional running shoes are a prerequisite to running, minimalism throws us a confusing curveball. It would have made more sense if instead I had asked her how she manages to run in conventional running shoes. But I already knew the answer to that question, because for decades I ran in such shoes. Getting out of them was a necessary step in improving my form, becoming stronger, and having more fun.

We Should Value Running Form Instruction Like We Value Swimming Lessons

This time of year at the recreation and aquatics center where I work people are busy signing up for the seasonal swimming lessons. There are 140 different group classes designed for different ages and ability levels. Several dozen private lesson slots are also available. Because people see value in them, they’re popular and fill up quickly. Most of us regard swimming as a movement skill that needs to be learned and practiced. But in the case of running it’s often assumed that we intuitively know how to do it well. We recognize the need to seek advice about how often, how far, and how fast to run in order to prepare for a particular running goal, such as a marathon or a 10K race, but running form or technique has been largely ignored. Research is increasingly showing that our lack of attention to running form is resulting in injuries and compromising our performance and enjoyment.

For 40 years the running shoe industry has filled that void by nurturing the beliefs that good form comes from selecting the “correct” shoe for our particular foot type, and that slickly marketed stability components and cushioning will protect us and make us happy runners. That’s like expecting a swimmer to move efficiently and with the least risk of injury through the water based merely on swimsuit selection. I think most of us would reject that idea as nonsensical.

We may be born to run, but we’re not born to run skillfully. Good biomechanics is not something a few of us are born with, but like a golf swing, a swimming stroke, or a tennis serve, is something that can be taught, learned, and put into practice. It’s essential for the elite and average runner alike. And while good running technique ideally should be part of every elementary school’s physical education curriculum, it’s never too late to start learning it.

Jumping is fundamental to human locomotion and doing it skillfully is part of good running form. Running is a succession of alternating single-leg jumps. How those jumps are executed and coordinated affects impact and other forces, running economy (efficiency), injury rates, and running enjoyment. So it is no surprise that proper minimalist running form largely mirrors good jumping form, and incorporating jumping exercises into a running training program is not merely useful, but essential.

When we jump, we intuitively land on the ball of the foot. Doing so allows us to better dissipate impact forces by engaging spring-like mechanisms in our feet and legs. Compared to landing on the heel, a forefoot or ball-of-foot landing allows the foot to flex, and promotes more flexing at the ankle, knee, and hip. The landing is softer, more comfortable, and with less injury potential.

In the first video I’m demonstrating a landing from an overhead drop, and then a single-leg jump off a BOSU® Balance Trainer with a two-leg landing. Jennifer also demonstrates her jumping ability and the explosive power of her hind legs. Each landing/jump is shown first at actual speed followed by slow motion at 35% of actual speed. Notice that in each of my landings there is generous flexing at the ankle, knee, and hip. I land on the ball of the foot, and at the point where my feet first touch the floor they are under or slightly in front of my hips. In the first move my arms are extended forward for balance, and there is a pronounced bouncing at the end that further dissipates shock. If the position I end up in at the bottom looks familiar, you may have seen my post about what I call the “pre-industrial civilization squat.” You can see more examples of some of these elements in the two other very short video clips—added mostly to show how jumping can be fun—that I pulled from the web.

Remember, running is a series of small jumps. Therefore, in minimalist running a forefoot or ball-of-foot landing under the hips is emphasized for the same reasons explained previously.

When adding jumping drills to your running program, start with simple, low-skill, two-leg vertical jumps. Do a series of quick in-place jumps in minimalist footwear or barefoot. Focus not on height, but on frequency, working up to 180 jumps-per-minute. A metronome is recommended. Once you’ve mastered that, try a series of vertical single-leg jumps. Both of these drills will help with form and coordination, but the single-leg jump in particular will help build strength in the foot and ankle.

The landing and jump I demonstrate in the video are more advanced. If you wish to progress to the overhead drop landing, start with shorter drops and as your form and balance improve, progress by bringing your legs up higher before letting go. Landings should feel good, and with practice you will learn to “plant” the landing and not tip forward or backward. For the BOSU® jump, I recommend first learning to balance with a single-leg, flat-footed stance. When you can hold that position easily for 40 seconds or more, try doing it standing on the ball of the foot. Only when that becomes easy do I recommend jumping off. Make sure to generate enough height and backward movement so that you clear the edge of the BOSU® on the way down. With the single-leg jumps you will likely find that you initially perform it much better with your dominant leg. Work on doing them well with either leg. And always make sure you’re having fun.